04 Febbraio 2023
the artisans
course: Home > the artisans > Arte in Bottega 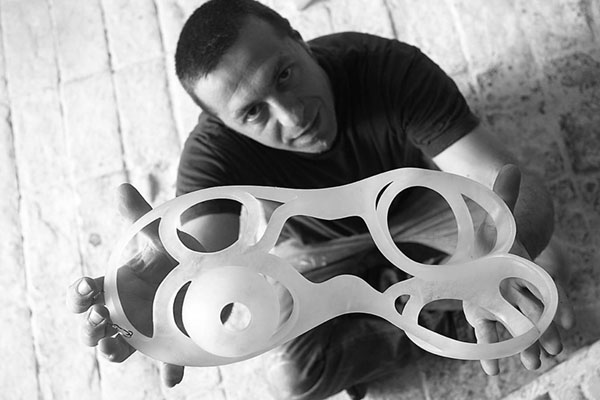 Sculptor born in Volterra on 28th August 1971 .
He attended The Institute State of Art of Volterra, alabaster section .
Graduated from the Accademia di Belle Arti di Carrara, sculpture section.
Since 1994 Alessandro have been participating in several group and solo exhibitions other than national and international sculpture symposiums .
In 1996 has contributed with the restoration work, specifically marble posing, in some rooms of the Kremlin in Moscow.
Since 2001 he has been working as scenographer at the Compagnia della Fortezza, directed by Armando Punzo.
In 2001 he created sculptures for the scenic design of C.S.I.´s videoclip named "Noi non ci saremo", awarded as best videoclip of the year on M.E.I ´s 5th edition (Independent Labels Meeting).
In 2003 he collaborated with David Dainelli for the realization of a series of sculptures and architectural models on behalf of the architect Vittorio Giorgini , storical exponent of informal architecture.
In 2003 he made the scenic design of "I Pescicani", directed by Armando Punzo and winner of the UBU prize for best play of the year.
In 2008 he realizes a sculpture for the cover of the book "Destinazione Pomarance" written by Piera Roland, former first presenter of the evening news on Rai 2.
Alessandro has created sculptures and models on behalf of the artist Mino Trafeli and also collaborated on the set-up of several sculptures of Mauro Staccioli.
Lecturer of alabaster sculpture at the Villa Palagione - International Centre of Culture and Study.
[

Attention!
You cannot make more than 10 mailings per day.
close
Choose the language
It appears that your browser language is different from the website.