17 Gennaio 2021
the artisans
course: home > the artisans > Arte in Bottega 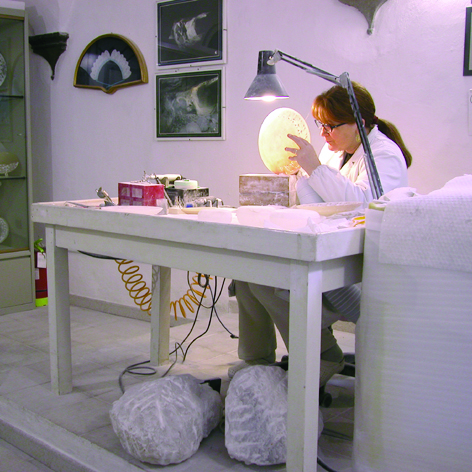 Since she was a very young woman, Gloria Giannelli gave a particular feminine identity to alabastrine craftsmanship, distinguishing herself in the making of pieces rich in fretwork details and fine embroideries. For the elegance of her objects there has been local, national and international newspaper articles written about her. She has participated several times in the "Premio Gremigni" sponsored by the Cassa di Risparmio di Volterra, always getting important acknowledgments. Also very important have been her participations in the "Jugen Gesteldet" contest in Germany and in the "Mostra Internazionale di Urbino" from 1986 to 1988. In 1989 her designs went to China and Japan to be shown in exhibitions sponsored by Regione Toscana.
Gloria exhibits her fine creations in her studio, at Via di Sotto N°2.
Visualizzazione ingrandita della mappa
[