04 Febbraio 2023
course: Home > The learning tower in alabaster
The architecture
Apart from its extremely famous inclination that really seems to defy the laws of statics, the Tower of the Cathedral is a very unusual building and one of a kind, because of the high historical and artistic value of its forms and because of its peculiar location, within that vast and equally unique area that is the Piazza dei Miracoli. The building is located far from the Cathedral, between the apsidal area and the south-eastern section of the transept of the Cathedral. This is an unusual location â€" usually, a tower would be erected near the façade or along one side of the church â€" although this is not the only case, as it can be found in other complexes in town and in other Italian buildings.
In this case, however, it has an unusual value and reasons, because of its distance from the other monuments of Piazza dei Miracoli.
With its remarkable height, for which it was also used as a veritable visual focus, with its slim body, the Tower was in fact perfectly visible from every part of the square and probably also from the river Arno, so it acted as a connection between the city and the square, located in a suburban area of the city, and as a beacon, a landmark and a lookout, and finally as an authoritative symbol of the civic and religious pride of the local community.

The problem of the inclination is the one that over the centuries has most fascinated and intrigued visitors, art lovers and experts and that has made this monument so famous all over the world.
All this is also due to the fact that the reasons for the inclination of the building are still fairly mysterious.
The experts have discussed for a long time, especially in the last century, whether such inclination might be due to the static problems of the building while it was built, in other words whether the incline of the Tower was an effect that the builder had deliberately wanted to achieve or if conversely it was the consequence of an unpredictable or otherwise progressive subsidence of the ground.
In the last century, the increasingly accurate measurements of the building and the surveys of the subsurface conducted with a wide range of devices, combined with historical and archival surveys, have shed some light on the matter. The Tower was presumably initially designed as a straight building; however, it must have begun to subside right from the first stages of the building work. The subsidence was due to the special morphological features of the ground, composed of several layers of clayey materials and silt, run through by groundwater levels at about one metre deep. These conclusions can be drawn from an observation of the soil, and the corrections made to every floor of the building. What is certain, based on the scarce information we have, is that over the centuries the oscillation of the building was minimal, since it must have eventually settled on the ground. This situation is corroborated by the accurate survey conducted in 1817 by two English experts, Cresy and Taylor. A few years later, in 1838, some event must have occurred which must have abruptly accelerated the oscillatory motion of the building, bringing back the need to carry out some decisive protective work. On that date, based on historical and aesthetic needs, it was decided that the bottom of the tower had to be cleared of the mantle of soil that had been hiding it for centuries. This work, that caused the Tower to lose its balance, involved the demolition of the buildings and constructions that stood next to the Tower and above all the draining of the brackish water that always surrounded the entrance of the building. The subsequent measurements showed that the inclination of the Tower had increased by approximately 20 centimetres: in the 267 years between Giorgio Vasari´s surveys in 1550 and those of the two Englishmen in 1817, the inclination had increased by just five centimetres. The leaning movement kept accelerating for a few years after the work of 1838, then decreased again to about one millimetre a year. During the XX century, better information and improved technical instruments, along with the support of governmental and safety authorities, led to a proliferation of studies, surveys and even special projects.

The measurements of the Tower

the gratest work of Art in Alabaster throughout the world
[ 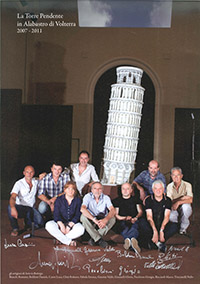 ]
www.ellegrafica.com - info@ellegrafica.com
close
Choose the language
It appears that your browser language is different from the website.